The link between Fortunato Depero and  the Campari Company was born in 1924, certainly propitiated by his friend and futurist Fedele Azari. But even if we cannot accurately reconstruct the circumstances and the extent of the first commissions for Campari, when we move towards the biennium 1925-26 we can observe some significant works that testify an already consolidated relationship. On one side a huge poster for the Bitter Campari that stands out on the Parisian rooftops in a photo dated 1926, on the other the famous oil painting “Squisito al selz”( Exquisite drink and soda). From spring to autumn 1925 Depero was in Paris present at the great Exhibition of Decorative Arts and, therefore, it is not out of place to think that the order for Campari was grown in those circumstances. Then, in 1926, Depero participated in the XV Venice Art Biennale where he presented an oil painting dedicated to the Commendator Campari and titled “Squisito al selz“. The thing in itself would have nothing extraordinary if it were not for the author’s important precise statement, added to the work in each of its publications: “Advertising painting – Non poster”.

To underline this statement, Depero turns upside down one of the most commonly adopted compositional principles in the creation of wall posters: namely the height must be greater than the base, ordering instead the figuration in a horizontal sense. The scene, dominated by remarkable effects of plasticity and interpenetration marked by a glittering chromaticism, represents some patrons of a probable Bar Campari while they are tasting the Bitter with soda water, the most fashionable drink at the time. Depero denies art as it was understood by idealistic aesthetic speculations, affirming that the artistic product is not pure, disinterested or spiritual, but utilitarian and ideologized, as he would have furtherly specified in his Manifesto on the Futurist Advertising Art of 1931.

The work of art, in short, as well observed by Glauco Viazzi in one of his last writings, is, from conception to fruition, the vehicle of something else.
So it is evident here that the meeting with Davide Campari, owner and also art-director of the company, and the futurist Depero, represents a very precise, emblematic case, both in the history of 20th century Art and in the field of Communication.

For Campari, Depero over the years, at least until 1931, created dozens and dozens of projects for colorful posters and black and white sketches. Of the former, only a few were actually used, precisely because Campari verified that his ‘client-type’ was the middle-bourgeois who, rather than looking at the posters on the streetwalls, used to read quietly the newspaper sitting at the bar. And therefore the black-white advertisements were the ones actually published. But then Depero also designed advertising furnishings, lamps, trays, wooden puppets, and even advertising totems.
Some of his creations were considered too modern for the time. Just think to the 1928 Bevitore (Drinker) on a purple background: its chromatic impact, notable even today, if printed and affixed,   would have been a sort of “eyesore against the people who saw it” … to quote an advertising magazine of the time. Besides, its extreme linearity and conciseness immediately communicated (and communicate) the message, somehow urging the people to taste  the product. But the most extraordinary aspect is the lettering which, although over ninety years old, is so extremely current even nowadays, that it seems to come from computer graphics, more precisely from “Pac-Man”, a very famous video game of the 80s of  last century.

And, then, another creation by Depero, already outlined in 1927 but entered into production only in 1932, is the famous Campari Soda bottle that Depero conceived simply by reversing the shape of the Bitter glass, as he had often done, even previously in his graphics.
Many people perhaps do not know it … but when they pick up the Campari Soda bottle … they pick up a Depero’s creation.
The new Campari limited editions, which present three different artist’s graphics on the labels, in a new version animated by color,  also demonstrate the modernity and timeliness of Depero’s ideas. Yet another demonstration of the strong bond that still exists between Depero and Campari.

An evidence of the fruitful collaboration between Fortunato Depero and Campari is today kept at the Galleria Campari which collects the  whole history of the brand from 1860 till today.
Galleria Campari is situated in the spaces of the liberty building dating back to 1904, in via Gramsci in Sesto San Giovanni, Milano. The building, the first industrial production plant commissioned by Davide Campari, was restored by the architect Mario Botta who, with great compositional ability, placed it in the context of a modern structure. There since April 2009, have been located the Headquarters of the Campari Group, on the façade stand out with a subtle play on the inclination of the bricks, two large design compositions conceived by Depero. 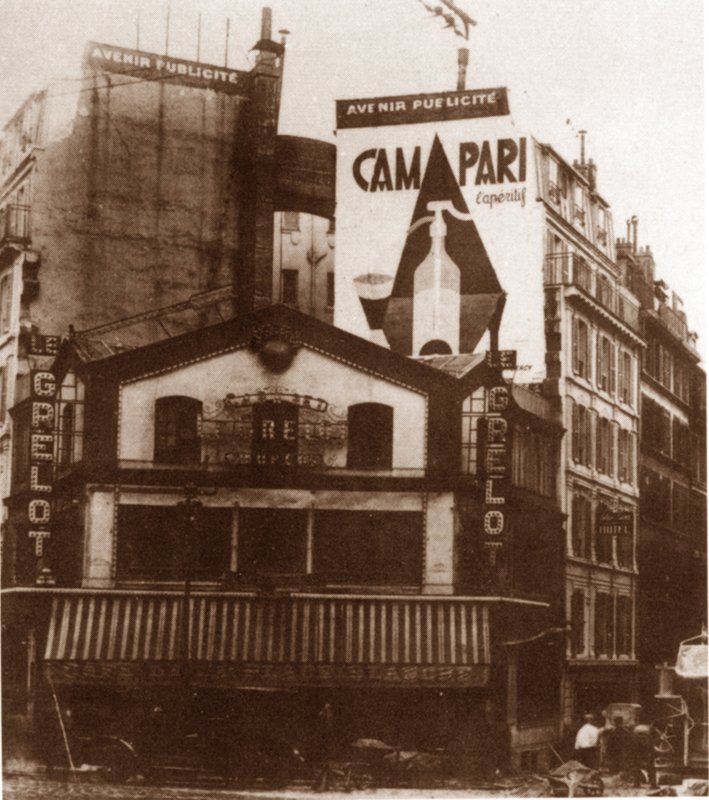 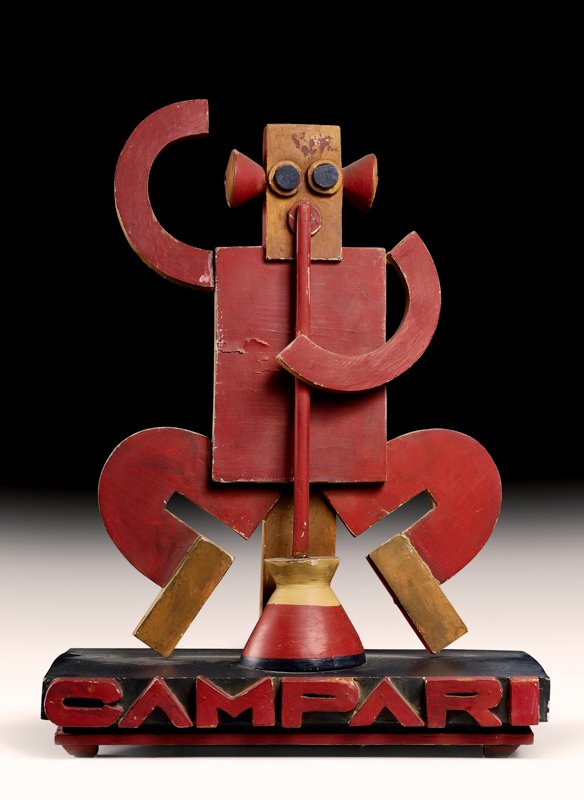 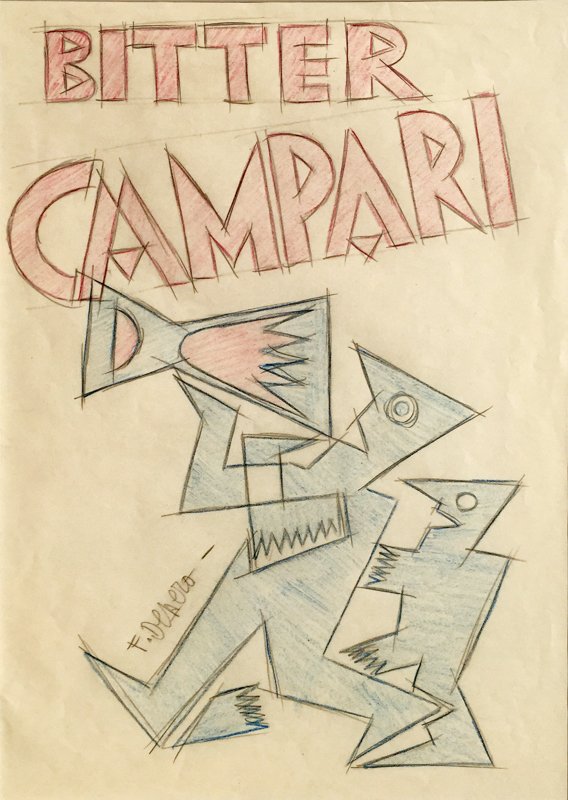 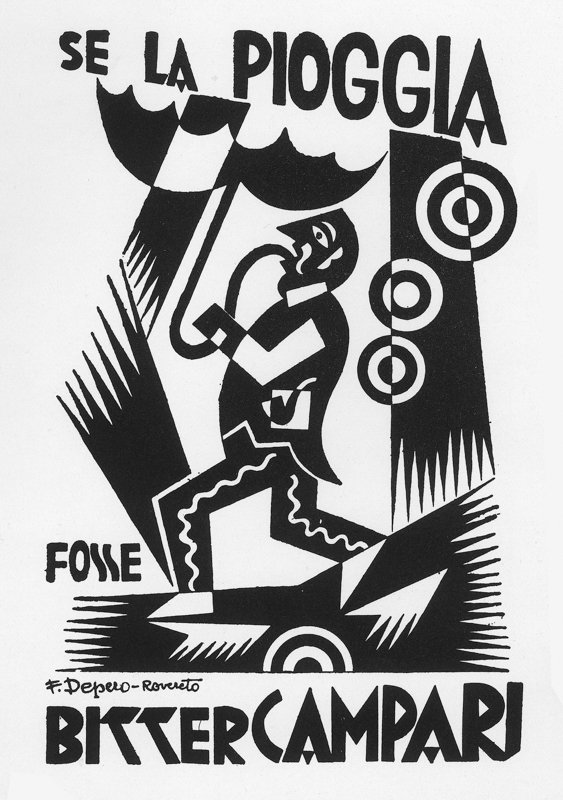 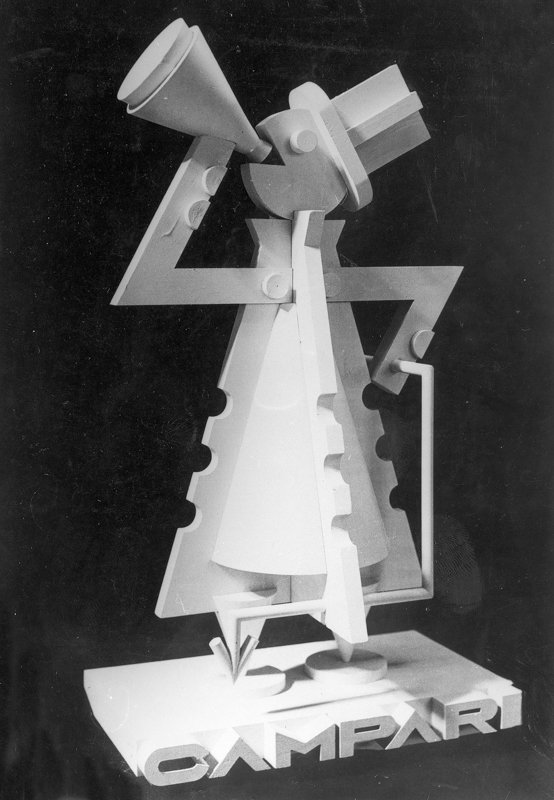 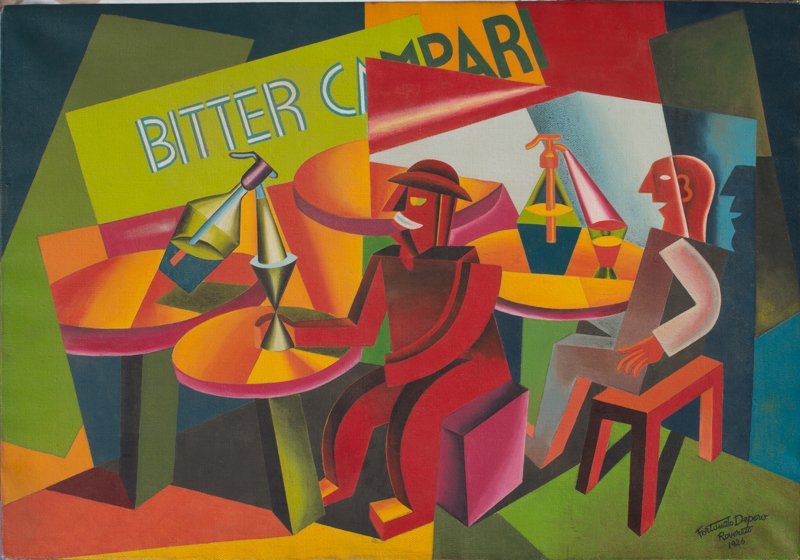 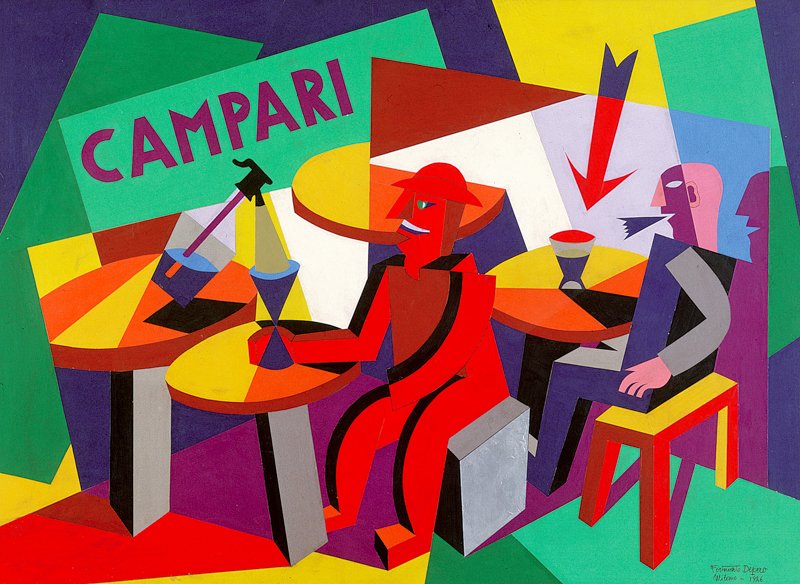 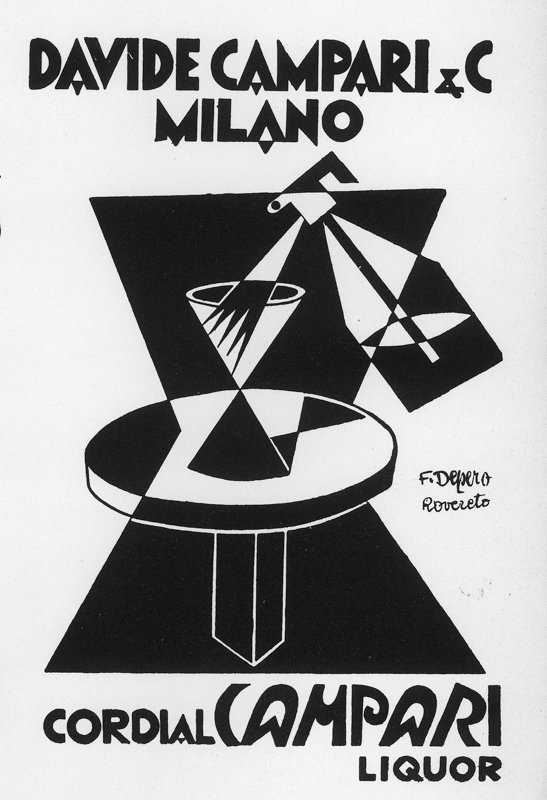 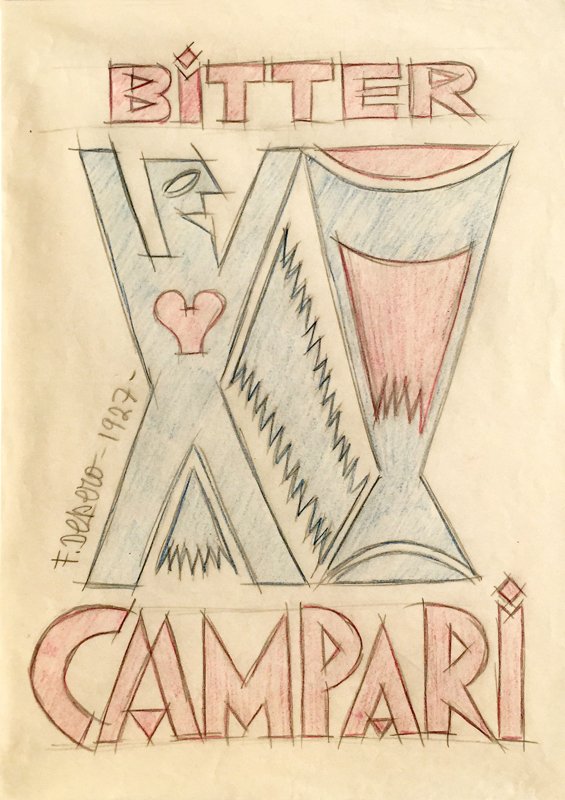 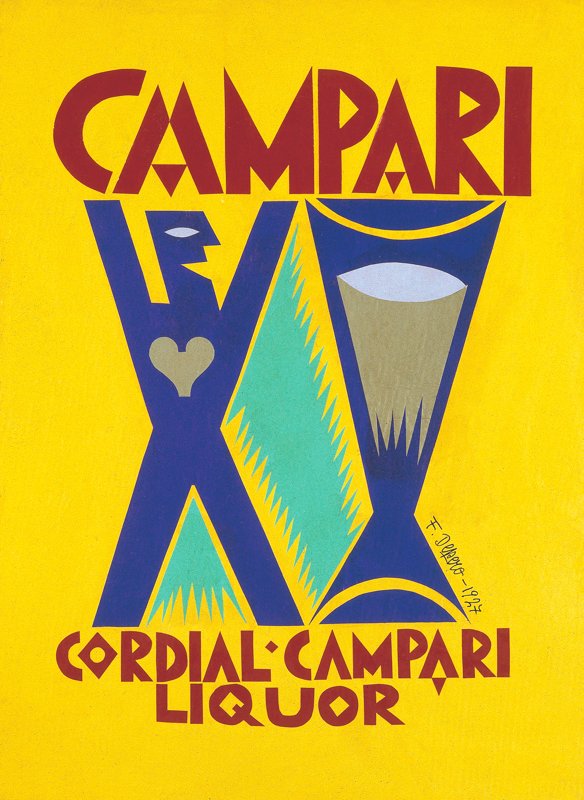 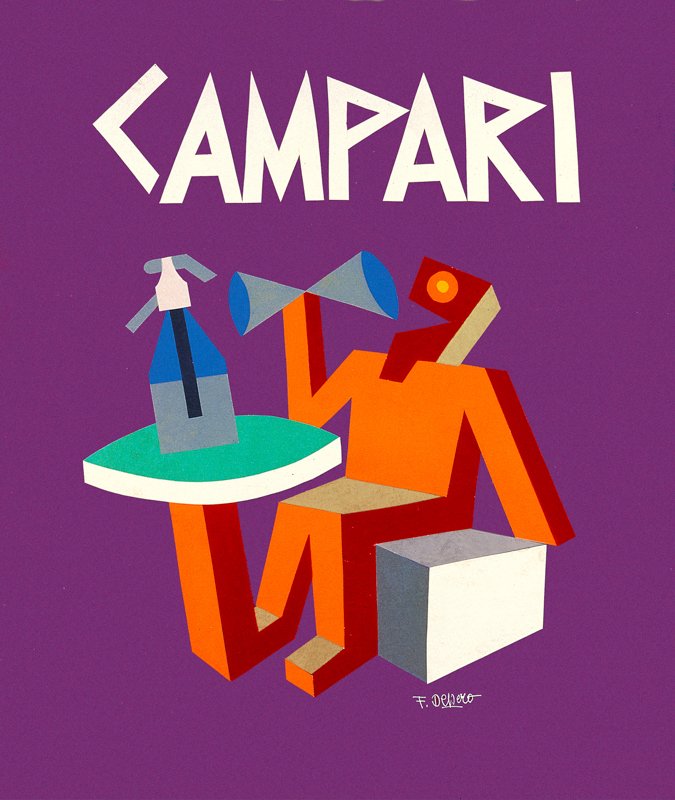 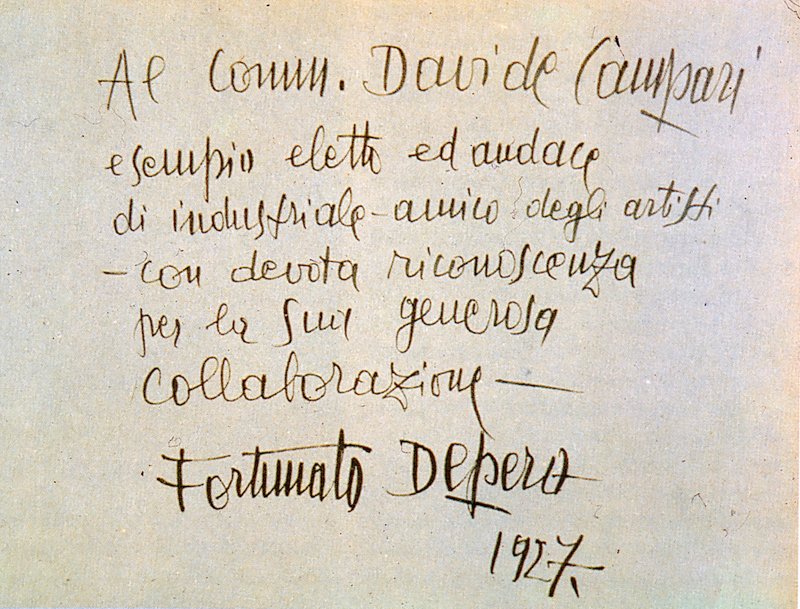 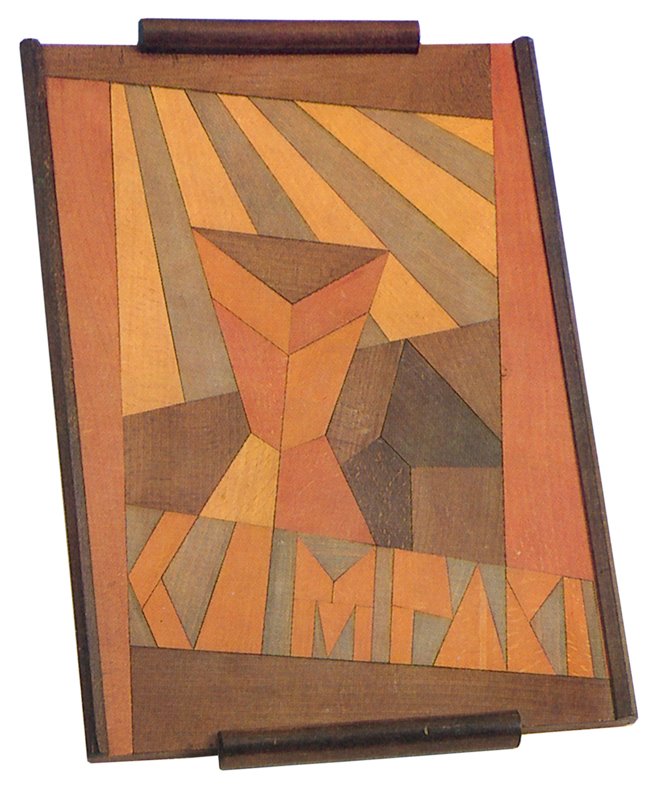 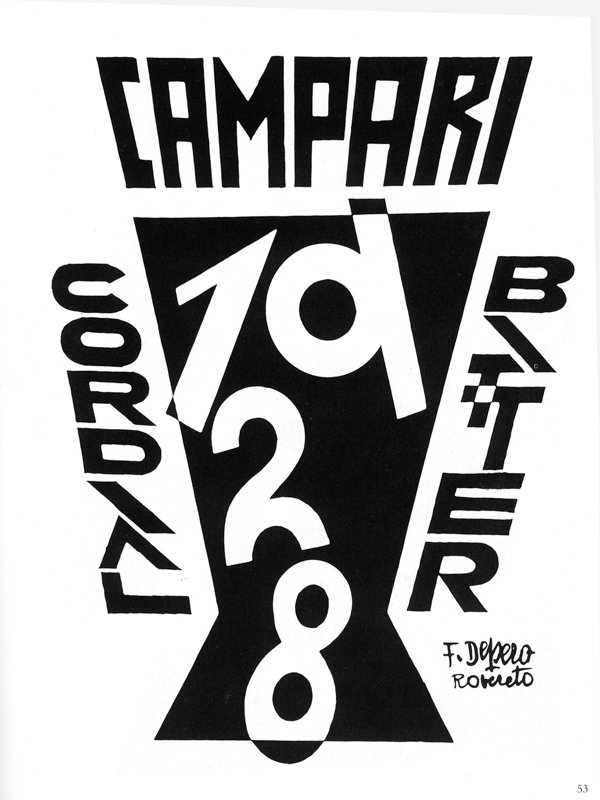 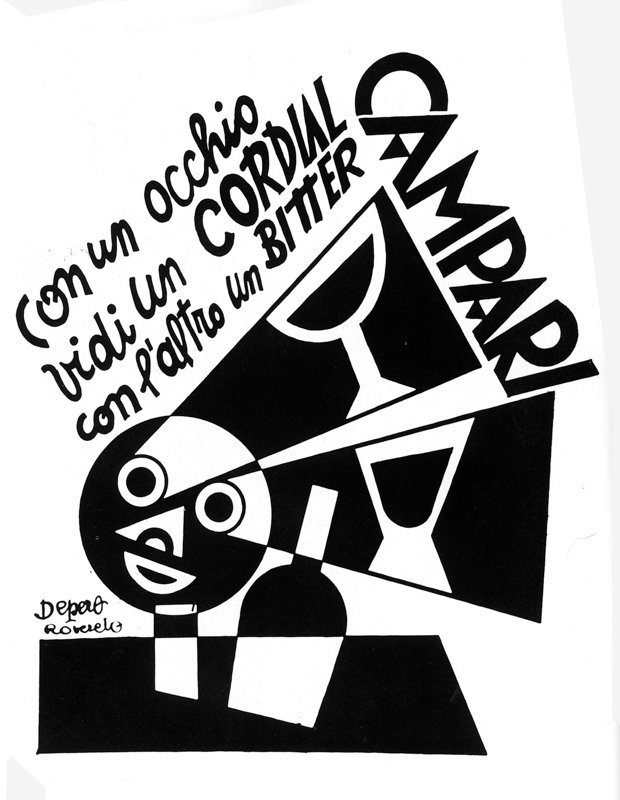 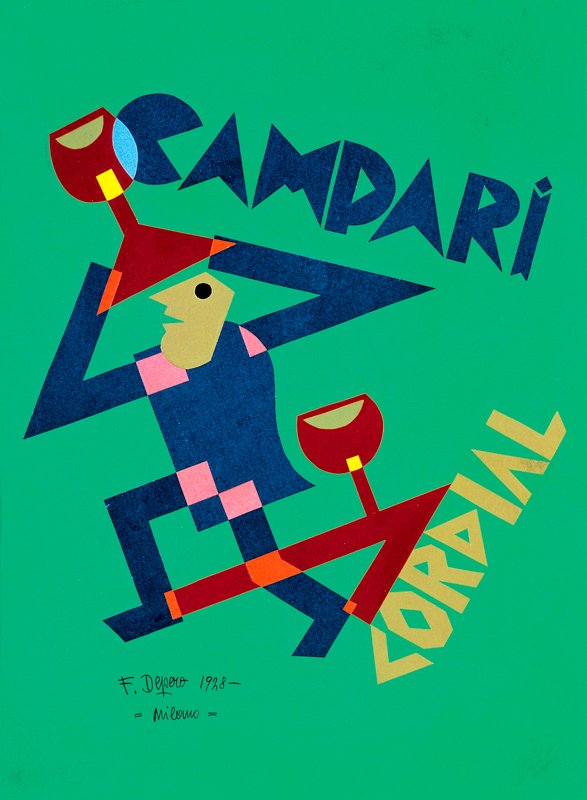 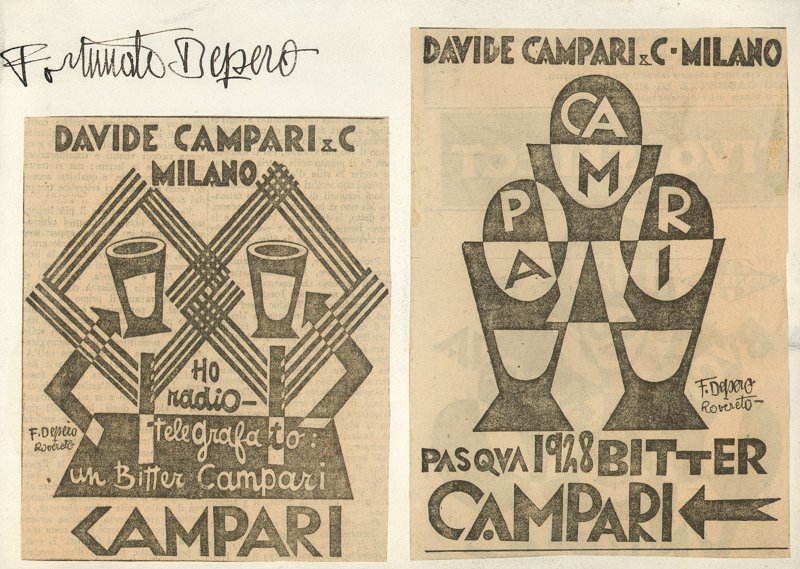 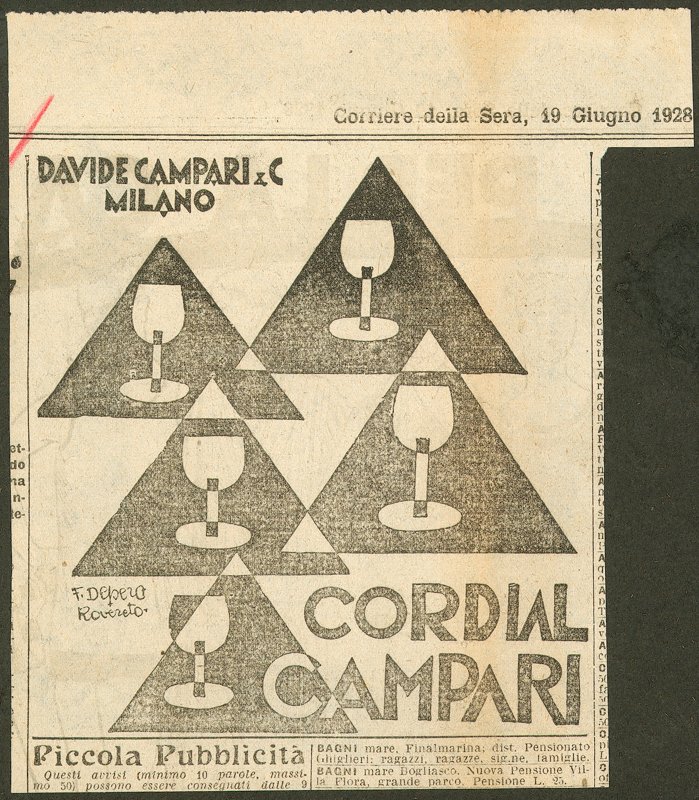 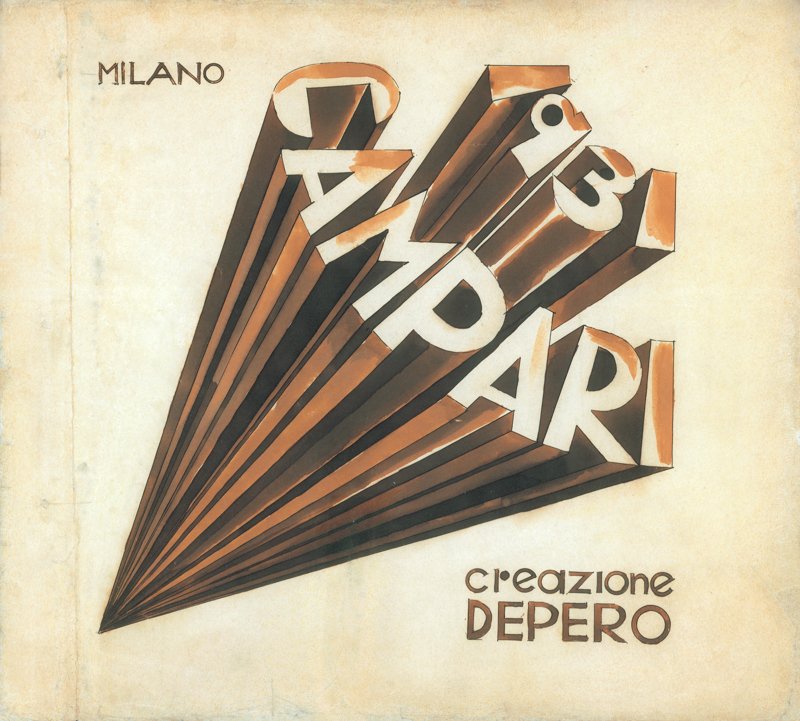 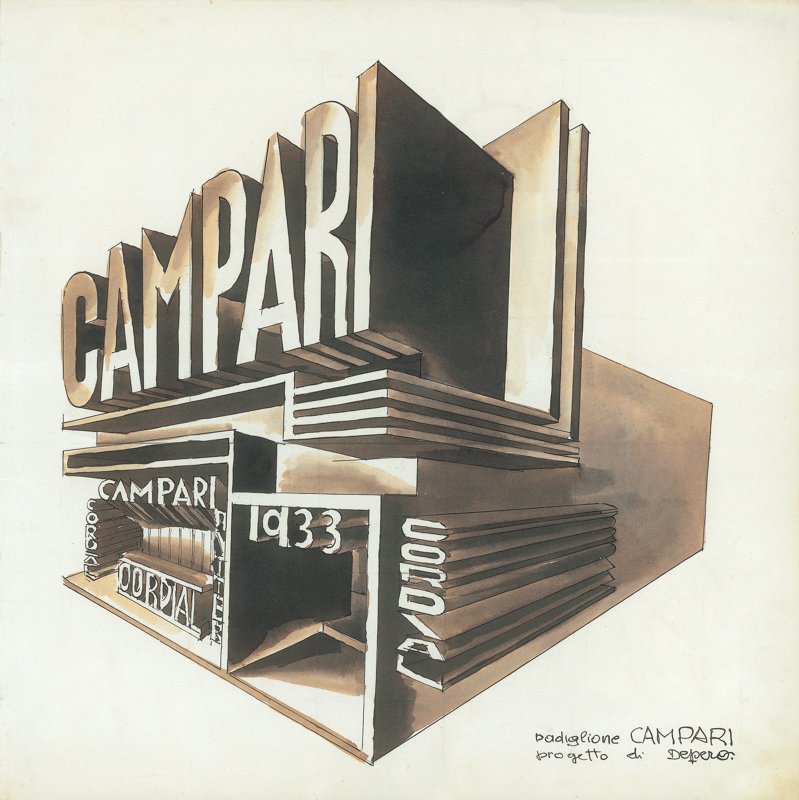 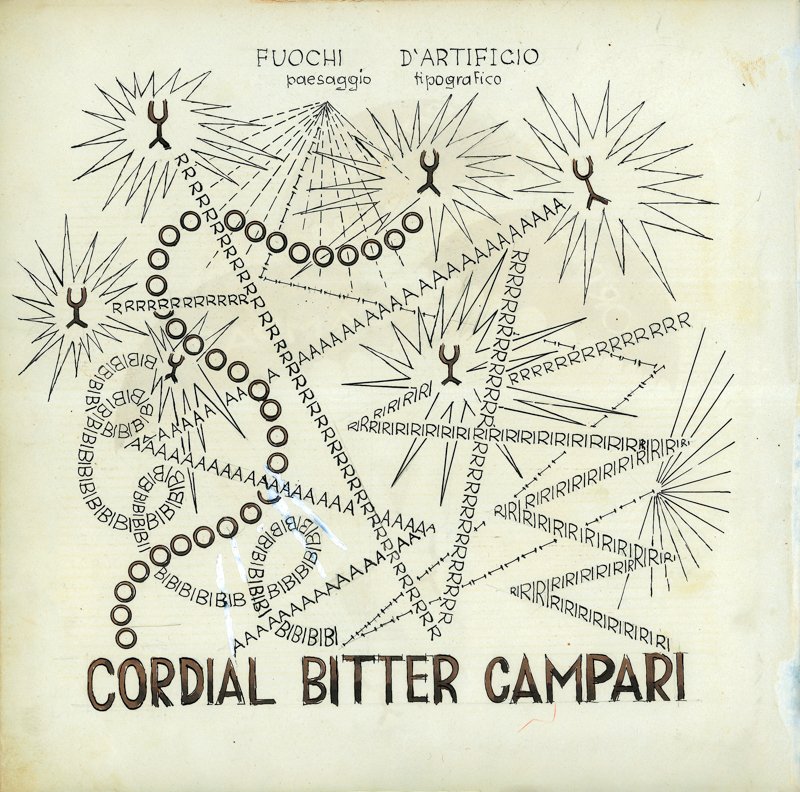 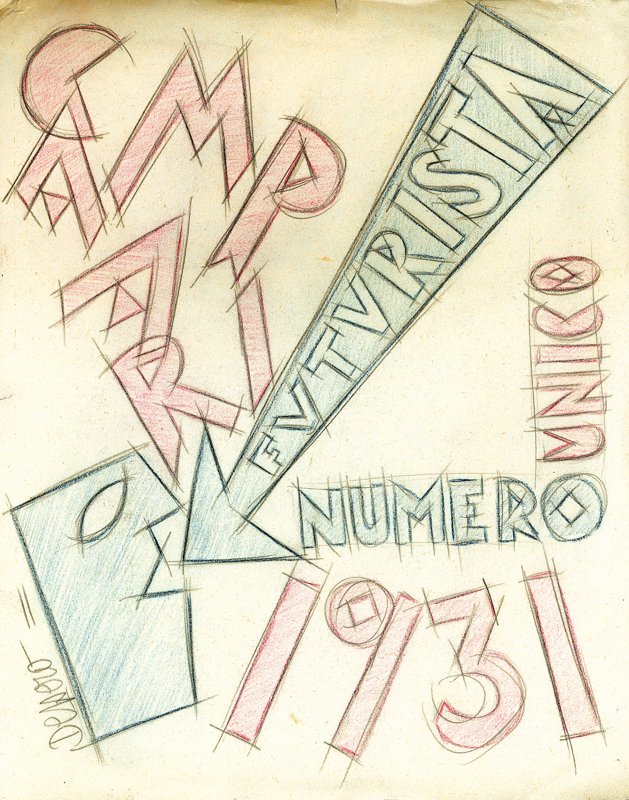 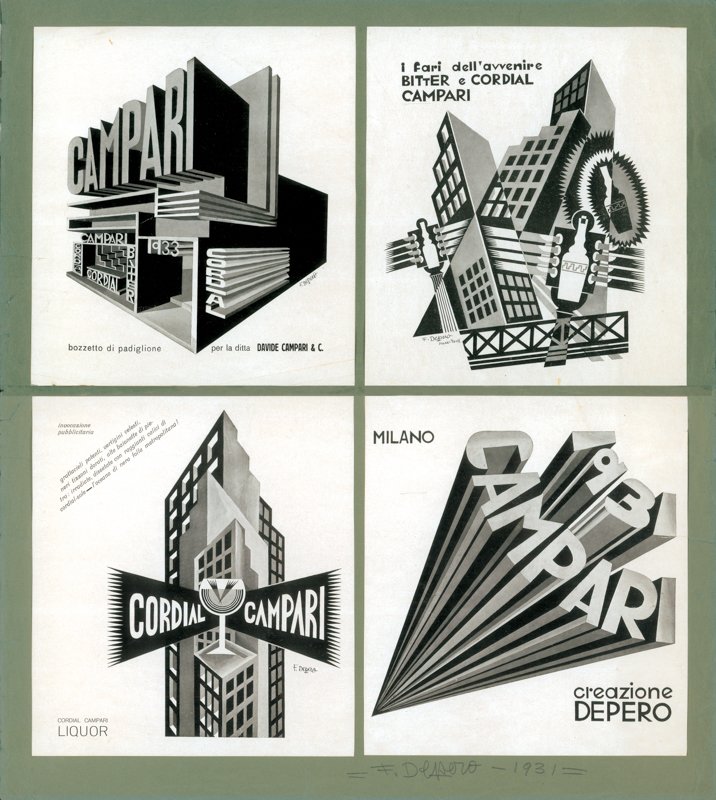 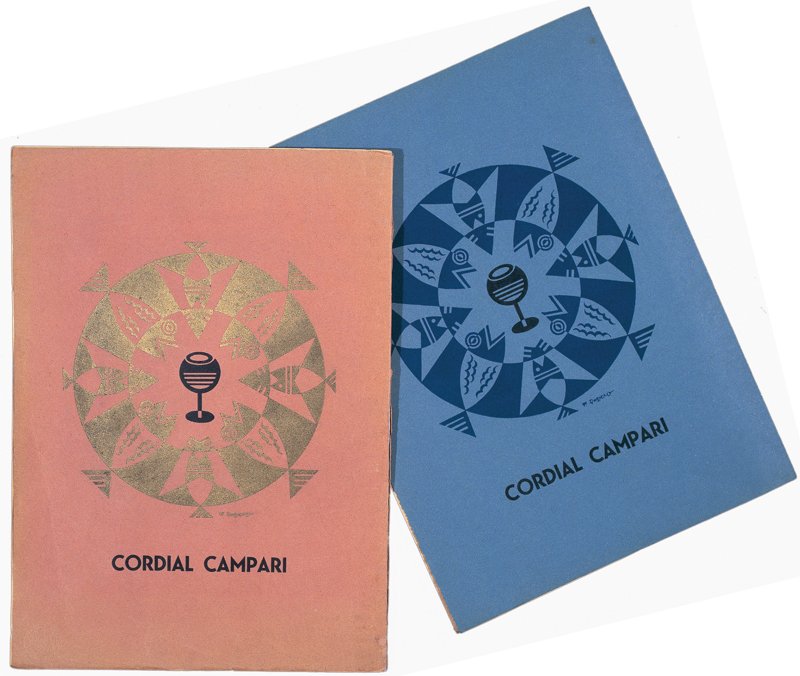 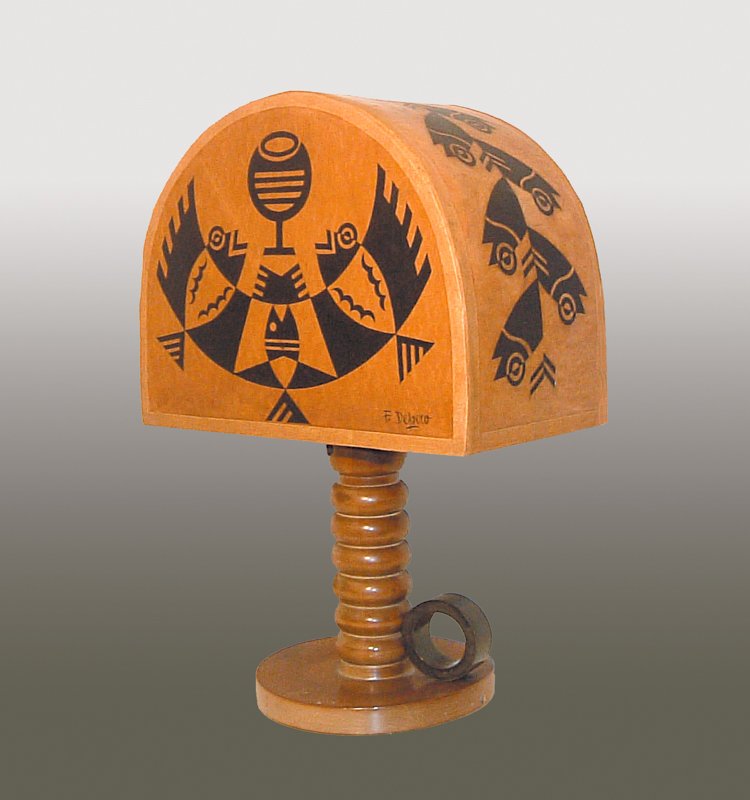 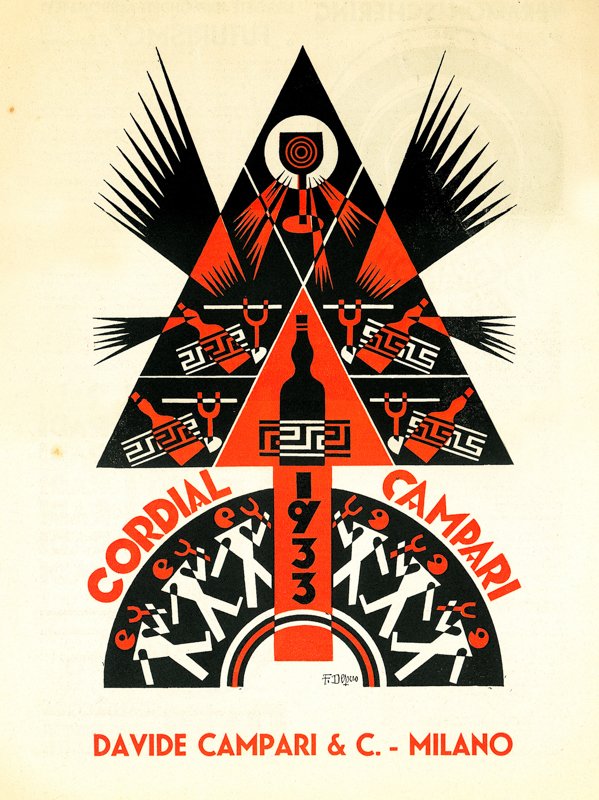 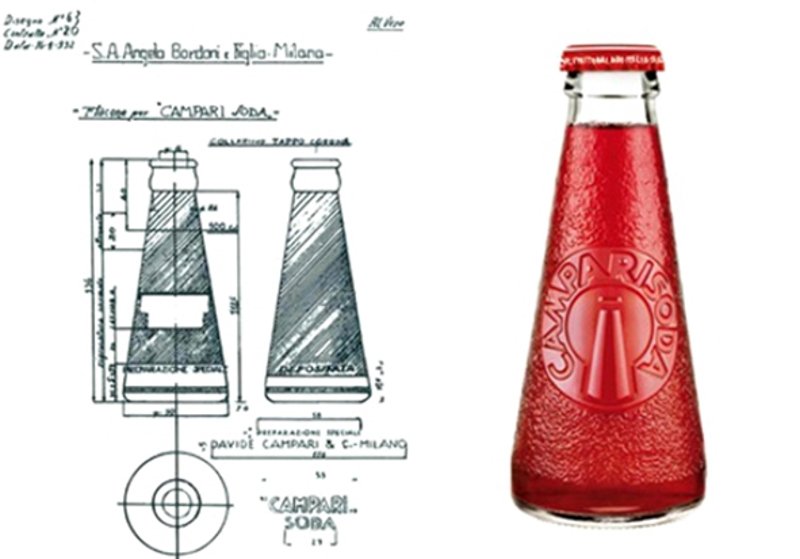 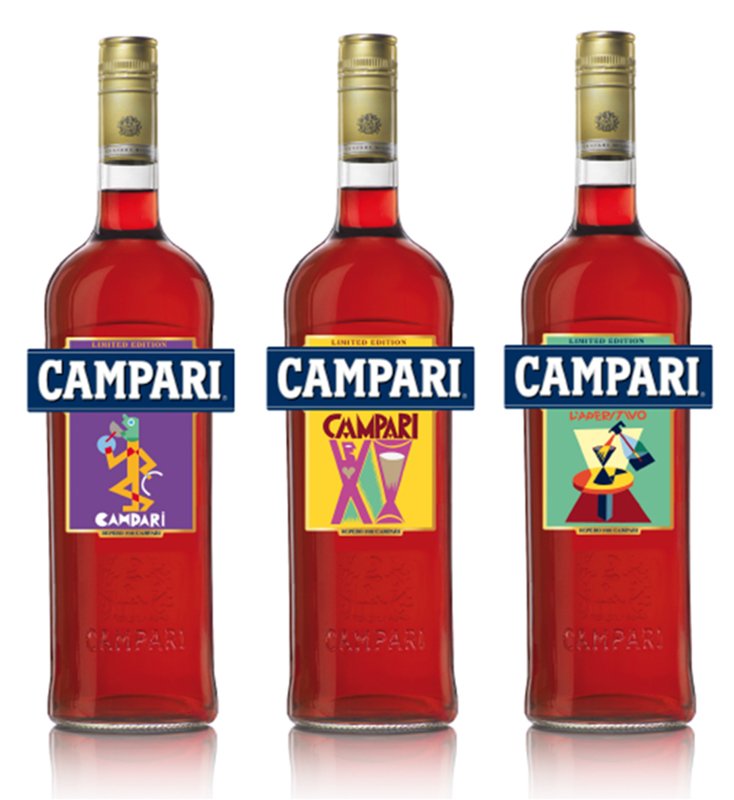 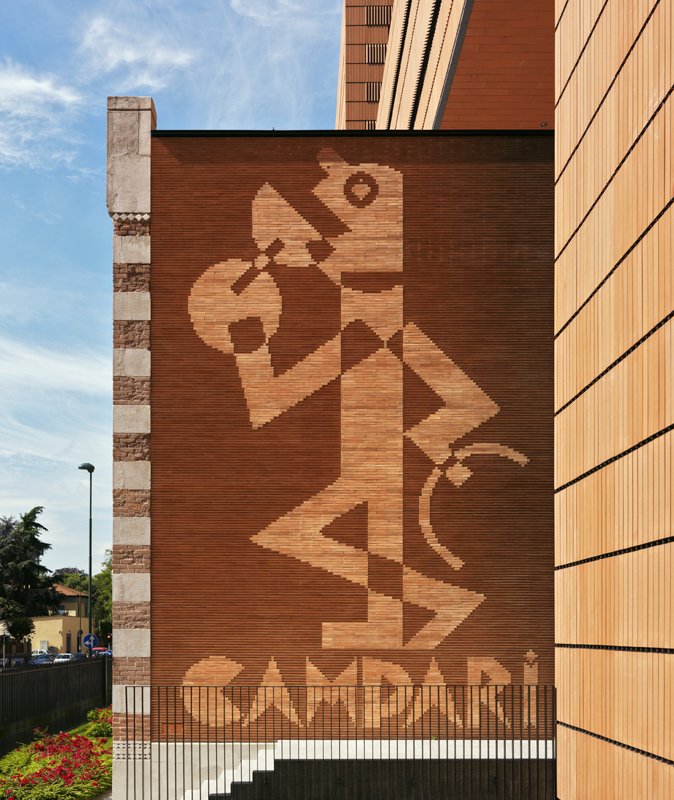